There is so much information online about how to clip rabbit nails, it can be overwhelming. Some people say it takes more than one person to clip a rabbit’s nails, others say they don’t even try to do it, they just take the rabbit to the vet or groomer to have it done. There is a lot of misleading advice out there, such as flipping your rabbit over, onto its back and putting it into a “trance”. Do not attempt this! Only a few rabbits can actually be restrained in this manner, and it is dangerous to put a bunny in this position because of its delicate spine.

There is also the “burrito” technique, in which the rabbit is wrapped tightly in a towel or blanket. The bunny burrito is stressful for the rabbit and it can be very difficult to get the rabbit bundled up enough to restrain it. Another common misconception is that using a flashlight to examine the nails helps you determine where to do the clipping. If your rabbit has dark nails, they will be opaque, not see-through, and so a flashlight won’t make any difference. If your rabbit has light colored nails, they will be translucent enough for you to see where the vein ends, without a flashlight. Allow me to explain a simple, successful, and stress-free method of clipping your bunny’s nails.

There are a few items you should have ready before trying to clip the bunny’s nails: 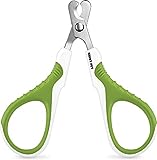 When to Clip Rabbit Nails

Check your rabbit’s nails to see how long they are. If they are longer than the fur on their paws, it’s time for them to be clipped. Also, choose a time when the rabbit is relaxed and laying on the floor.

Where to Clip Rabbit Nails

In terms of the room, you should do the nail-clipping on the floor, in a room where you can easily re-position yourself when the rabbit hops to another area. Placing a bunny on a table or on furniture is stressful and dangerous.

How to Begin Clipping Rabbit Nails

Calmly approach your rabbit, and position yourself along its side. Pet the rabbit to help it stay relaxed. Use the hand that is closest to the rabbit to gently pick up and hold its front paw that is nearest to your body. Talk to the bunny in a praising manner, saying things like “Good bunny” and “Who’s my good boy/girl?” helps a lot. Act calm and casual, so that the rabbit doesn’t become suspicious and scared, and place the clippers on the tip of one of the nails, and quickly press the clippers together firmly, to get it over with as soon as possible. The longer you just sit there holding the bunny’s paw or fiddling with the clippers, the more you will stress the rabbit out, and it will take off running. Even if you clip the nail quickly and successfully, the rabbit will likely hop away from you and then settle down again. Follow the bunny calmly, and re-position yourself at its side, and continue this process for each nail, and each time that the bunny moves away. The back paws have larger, thicker nails, which will be slightly harder to clip. You will need to use a bit more pressure on the clippers to cut through them. Position yourself in the same way as for the front paws, at the bunny’s side, and only clip the tips of the nails.

After clipping a few of the nails, you will begin to feel more confident, and so will the rabbit. The bunny should soon realize that nail-clipping is not as terrifying as it seems, and it will let you get it over and done with. If you and the bunny become frustrated, just take a break. You could even leave it until another day, and then try again. Remember, rabbits are very sensitive, and they know when you are nervous, stressed, or frustrated, and they will become nervous as well.

Are you fond of pets – particularly rabbits? Well, if you own a bunny as…

Who said animals don’t want a bed to sleep or relax? They too have the…

How to Buy a Healthy Rabbit: A Checklist For Choosing a Physically Fit Bunny

If you’re buying a pet bunny from a pet store or a backyard breeder, you…

Come Visit Us!
About

Hi! We are the Rabbit Experts! We are super excited to help you learn how to love and care for your furry friends! We will share with you info and tips about rabbit care, rabbit food, rabbit health, rabbit hutches, rabbit toys and so much more!
Recent Posts
© Copyright. All Rights Reserved by Big 10 Media LLC.